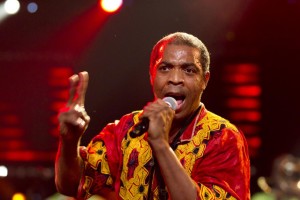 The French President was in Nigeria on a 2-day visit and he visited the Afrika Shrine which is associated with the memory of Fela Kuti, the late Afrobeat legend. Days before his visit, the Lagos State government made some donations to the shrine, in an obvious attempt to impress the visiting President. The Governor Ambode-led government reconstructed the road leading to the shrine and donated a new generator to the shrine.

A certain @rasromio quizzed Femi Kuti on social media if he made the pretentious donation of the Lagos State Governor known to the French president, Femi Kuti confirmed that the foreign president was told of the ad hoc arrangements made to impress him (French President). In response to the question, he wrote, “yes he was told.”

Femi Kuti admits telling Macron how Ambode fixed the road leading to Fela Shrine, a day to his arrival