Previous: Davido Promises The Young Man That Got Brutalized For Threatening Wizkid In Surulere The Sum Of 1 Million
By Taiwo Oluwafemi | May 9, 2019 | 10:25 - Leave A Comment 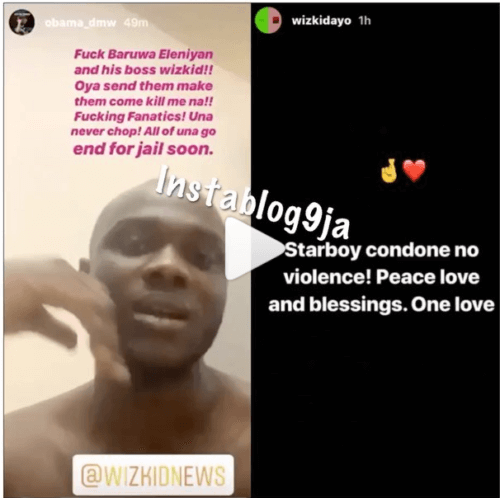 Could it be that we haven’t seen the greatest of the derailing effects of the rivalry between Davido and Wizkid just yet?

One of Davido’s gang members by name Obama DMW has taken a move that could most likely create a major controversy in the music industry as he threw heavy shots at Wizkid and Baruwa Eleniyan, the guy that brutalized the young man that threatened to boycott Wizkid’s songs in Surulere.

Obama took to his Instagram Story to insult Wizkid and Baruwa as well as blast him for being a bad role model to the young ones. He said how can a person who is a superstar orchestrate the unnecessary punishment of an innocent person and also make it public.

#Wizkid finally frowns at the beating of #ShokiShitta, as #Davido’s crew member, #Obama, slams him for initially “endorsing” it. [Swipe]