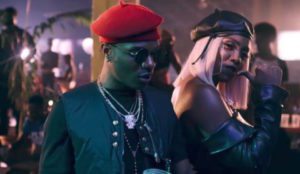 Prepare yourself for the impact of another Tiwa Savage and Wizkid collaboration. There is every indication that another collaboration between the two singers is ready.

Some minutes ago, Wizkid broke the news of another collaboration with Tiwa Savage on Twitter. The Starboy wrote that “new tiwa x Wiz  ? Hit! ????Gbedu dey come ! ??” and the music community has already caught the buzz. Word has been spreading in the circle of fans that another major hit is on its way.

The story comes with intense excitement for a lot of fans who have witnessed and enjoyed the chemistry shared by the two singers. Tiwa Savage and Wizkid first collaborated in 2015 on a song titled Bad and it turned out to be a major success. In 2017, the duo recreated the magic on a song titled Ma Lo, off Tiwa’s Sugarcane EP, and the industry still hasn’t recovered from the impact of the hit.

With the news of another of Tiwa-Wizzy duet on its way, expectations are sky-high and the count down to the release date has begun. It is our sincere hope that the song would meet the high expectation.