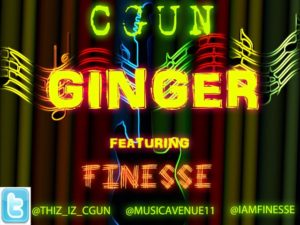 Ajayi olusegun AKA “C-GUN” started his musical journey in 2004 back in high school (Kings College,Lagos). As a young individual, he started learning rap by listening to the likes of rakim, krs1, BIG, 2pac, 2short, NWA and many more legends and giants. Growing up in the streets of Lagos inspired him to create his own style and delivery especially with freestyling which was used as a tool to improve his lyrical prowess as he indulged in Battle Rap. Cgun is currently working on his debut album titled “GAMETIME”, he’s currently with various upcoming artistes as talented as ever,He is a co-founder of Major League,a production outfit run by fellow colleagues 1chance and Xavier. Cgun believes the future of music,hip hop especially is bright and he’s promised to be a part of it till d end of his career as he plans on taking his work outside d shores of Africa into the Mainstream… This is Cgun’s first official single “GINGER” produced by One_Chance (@mrusoro) He is currently being managed by Music Avenue. follow @thiz_iz_cgun and @musicavenue11