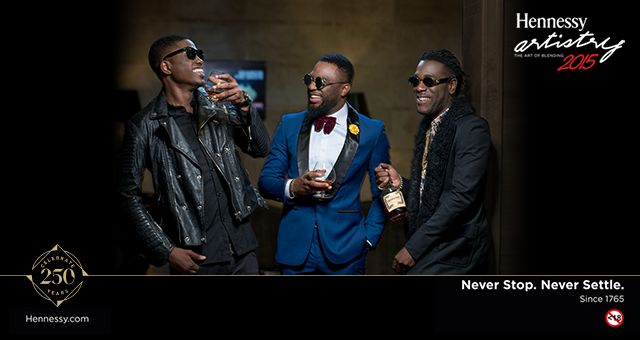 HENNESSY is celebrating its 250th anniversary celebration this year. Despite plans to celebrate this anniversary, its annual music-fest “Hennessy Artistry” – an innovative musical platform- is set to be a more unique celebration of the relationship between Music and the Hennessy brand as it takes a new turn to re-emphasize Hennessy’s love for music hence, the theme for this year’s celebration; “Hennessy loves Music”.

The first artiste to be unveiled was R&B singer and songwriter Praiz. He was unveiled on Wednesday August 5th 2015 as one of three acts that will serenade music and Hennessy lovers in this year’s event. Vector, the prolific Hip Hop lyricist came next on Friday August 7 2015, and bringing his blend of Afro Beat and Dance Hall music, Burna Boy the Afro Fusionist was unveiled on Tuesday August 11th respectively.

The Hennessy Brand Manager revealed that Hennessy Artistry will be celebrating music from a genre perspective across different months. “Hennessy in Nigeria has been known in recent times as a key player role in the growth of the music industry and as such, Hennessy is drawing attention to other genres in the music industry that may not be celebrated as they should in Nigeria”.

“We also want to explore music through our headliners’ experiences, their stories and their potentials. We are identifying with the artistes’ personal struggle of realizing and never giving up on their talents amidst all the challenges, especially in their choice of music genres”.

Hennessy’s affair with music spans over its 250 years of existence and since the creation of the brand, it has partnered with different artistes and genres across different parts of the world. Hennessy Artistry has collaborated with renowned artistes like Rakim, The Roots, Miles Davis, Marvin Gaye, Kanye West, Nas, Neyo, and LL Cool J. In Nigeria, since 2008, Hennessy has creatively engaged DJs, Producers, and Artistes. This year’s events will raise awareness for Hennessy’s love for music while providing an opportunity for its audience to own and identify with it. The Hennessy Artistry will be celebrated by brand representatives, brand ambassadors, lovers of Hennessy Cognac and a select group of affiliates who share the same interests as the brand. Previous Hennessy Artistry headliners include Jesse Jagz, Nneka, Cobhams, Kas, Jude “MI” Abaga, Banky W, Sir Shina Peters, Tiwa Savage, Ice Prince, El Dee, Bez, Wizkid, 2Face and other notable Nigerian acts.