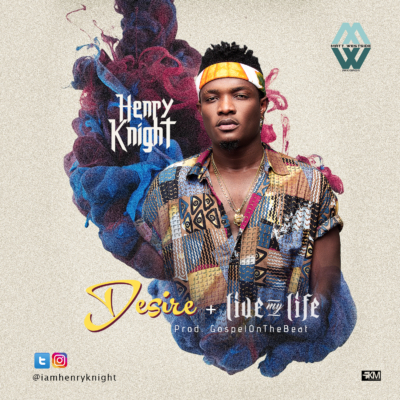 Henry Buchi Ike, popularly Known as Henry Knight, has been on top of his game since 2004 and for sure his name is not anonymous in the music scene. He started singing professionally in 2004 with a group called “THE KNIGHT” which was signed under Dove Entertainment owned by renowned Nigerian producer Nelson Brown. In 2008, he left the group to start his solo career as ‘Henry Knight’. The talented act who has dropped different singles with good top notch features such as “Olopa”, “Bami Mujo” featuring Yung L and Patoranking. Also, the remix of ‘Olopa’ featured Di’Ja, Yemi Alade and Joe El, His most recent offering ‘Damilohun’ was released on May 20th 2016. Shortly after releasing ‘Damilohun’, Henry Knight scored a mouth watering record deal with Matt Westside Records is here with new double single titled “Desire and live my Life” produced by one of the best producer in Nigeria Gospelonthebeat. Watch for henry knight new project movement as he is here to storm the industry with fantastic content to make you feel good music.