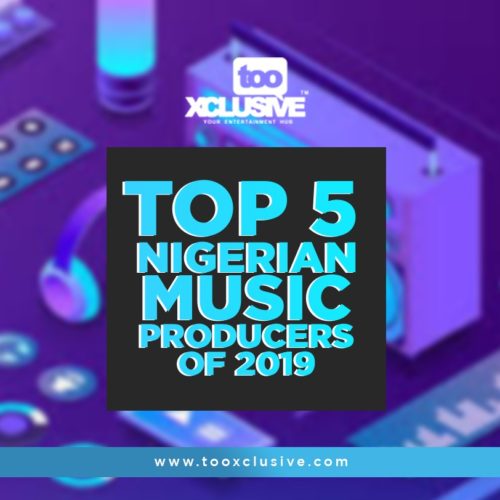 All we often do is sing the praises of our music artistes when they drop very good songs forgetting that one of the hardest jobs of making music also is the job of the producers.

Although the music artistes deserve the praises they get as performers in a song, however, the producers when examined critically are equally deserving of the praises the artistes get. And in alliance with the sermon of this publication, we have highlighted below the top 5 Nigerian music producers of 2019. These artistes have produced a lot of songs in 2019 and especially some hit songs and they have been the go-to producers for music artistes in 2019.

Rexxie – This young talented music producer is definitely one of the breakout shinning stars of the Nigerian music industry in 2019. He is an absolute beast when it comes to using his fingers to cause some level of ‘mannerlessness’ on the dance floor. Responsible for several hit songs (“Soapy,” “This Year,” “Opotoyi,” “Am I A Yahoo Boy,” “Bum Bum,” etc.) in the industry in 2019 alone, Rexxie has proven himself to be the most outstanding music producer of the year, moving way ahead of his peers. He deserves the top spot.

Kel P – This producer has been a vibe since late 2018 and he also has taken that fantastic form into 2019. Kel-P also in 2019 has produced a couple of songs that definitely would fight for the top spot in the list of biggest Nigerian songs of 2019. He produced Burna Boy’s “Killin Dem” featuring Zlatan as well as another Burna’s record; “Dangote.” Kel-P has also worked on Wizkid’s “Soundman Vol.1 E.P” and has been consulted by several other Nigerian musicians who are in search of hit records.

Speroach – A very good pianist according to according to sources close to him. Speroach has proven himself as a truly fantastic music producer. He caught the eye of music enthusiasts first with his efforts on Davido’s “Assurance” and 2baba’s “Amaka” in 2018 which were absolute solid jams. In 2019, he continued his form but going even further with his golden touch on Peruzzi’s “Majesty.” If there was any doubt about his talent or efforts in 2019, the producer cleared it all with the brilliant and magical production of Davido’s smash hit record; “Risky.” He added an icing on the cake with Mayorkun’s “Up To Something.”

Killertunez – The 2018 breakout star in the music production area of Nigerian music hasn’t relented in his efforts to becoming one of the biggest names on the African music terrain. He pushed his brilliant showing into 2019, making commanding efforts on Joeboy’s “Beginning,” Mr Eazi’s “Doyin” featuring Simi and a few more songs. Killertunez although is still a prospect, he has made himself look so huge in the Nigerian music industry that you would think he’s been around for almost a decade. He is the one producer on this list that has a signature intro. that would raise your hope for an absolutely sweet tune from the speakers.

Pheelz – For someone that works mostly with Olamide and artistes associated with YBNL, Pheelz stretched his gazes a bit more in 2019, working with other artistes in the industry. Pheelz is almost looking like a veteran in the Nigerian music terrain due to his ability to create classic productions that would give a reminiscence of the last generation of music stars. He has done really well in 2019 with hits like Olamide’s “Oil & Gas,” Tiwa Savage’s “49-99,” Billionaire” etc. He deserves to be a member of this list.

How Smartphones Have Changed The Online Gaming Industry

How Smartphones Have Changed The Online Gaming Industry