I Do Not Respect Him, He’s Contributed Nothing To Music – 50 Cent Shades Rick Ross

Previous: Timaya & The Only 7 Other Nigerian Artistes That Have Gotten A Grammy Award Nomination
By Taiwo Oluwafemi | Sep 17, 2019 | 16:21 - Leave A Comment 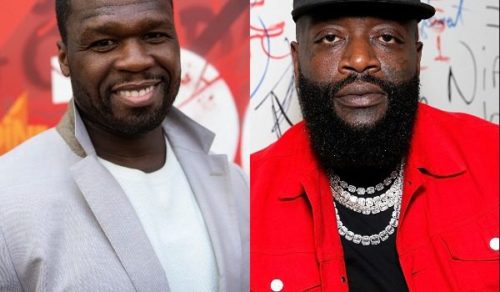 50 Cent has worn back his garment of pettiness and this time around he wraps Rick Ross in it.

50 Cent who many see as the king of trolls never shies away from putting out his thoughts on whatever and whoever he finds worthy of it. He is a direct person and one who seems never to be scared of going blunt on whatever topic or whoever person. The rapper and business mogul who currently is mostly about the production of his seasonal TV series, “Power” was interviewed by Real 92.3’s Bootleg Kev and DJ Hed to talk about his music and television series dealt what many consider a huge blow on Rick Ross.

50 Cent reveals in the interview that there is absolutely nothing he respects about Rozay, saying he used to be a correctional officer and that’s why his proteges; Wale & Meek Mill have gone to jail for unjust reasons. He insinuates he isn’t able to help in that regard and feel that was the only thing he could have respected about him if it happened. He stylishly debunks his musical skills and contribution to the musical game.

In his words, 50 said after he was asked if he has any respect for Rick Ross; “No, there’s nothing there. I never wanted to work with him,” Fif said. “Look, I understand from a perspective from someone who’s just listening to what it sounds like but does it matter he’s a correctional officer?Does that even matter? Look at the irony of artists that come under him… the hosts name of Wale and Meek Mill. “Prison reform and all of the wrongfully convicted and wrongfully treated people in the prison system, He’s on the whole other side of that. Just look at it.”

Rick Ross on collabing with 50 Cent: “Honestly, I’m a businessman. If 50 Cent still had value, I may have been done it.”

50 responds: “I don’t know what his value is to music culture at this moment.” https://t.co/cMISHIcy8V pic.twitter.com/n1s9r9VfcC