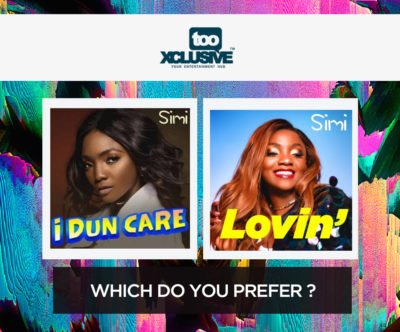 Today is WCW and ahead of her Simi Live In Lagos, we at Tooxclusive are crushing on the talented singer with a unique voice.

Simi has really put in a lot of effort this year as she has released so many good songs this year. Simi has really done so well for herself as she has been able to make a name for herself. The talented singer has dazzled us with her amazing songs and her performance on songs she appeared on. You all will agree with us that Simi killed her features this year talking from “Issa Goal Remix“, “Halleluyah“, “Stainless” and currently on charts is her most recent feature with Mr Eazi ; “Surrender“.

Her singles this year has been awesome as she really taken out her time to give us good music like “I Dun Care” and “Lovin”. Both these song are awesome and have almost the same story line but One still looks like to be people’s favourite.

Well between “I Dun Care” and “Lovin“, Which Do You Love The Most?