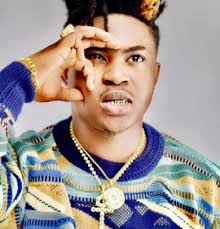 UK presenter; Shopsydoo, made some remarks in an interview with DJ Abass some days ago which initially did not generate controversies but has now done.

Shopsydoo said in the interview said that Wizkid is the person that paved way for the likes of Davido, Burna Boy and every other ‘kid’ that is doing music out there and as a result, these kids wouldn’t have existed if Wizkid did not achieve success.

As expected, the statement generated disgust from music fans. Surprisingly also, it has caused a furious Danny Young to make a long statement via his instagram page to Vehemently deny the authenticity in the statement.

Danny uploaded the video where Shopsydoo was made the statement, and in his caption for the post, he revealed he is the one who inspired every kid doing music now including Wizkid. He as well sort of demands that accolades be given to him and not Wizkid

Do you think Danny Young is right?

We made this song in 2006, it was one of d biggest songs in Africa. I was just 16. The youngest kid Artiste/Producer at Dat time. Parents flogged music talents off their kids, but it changed afterwards. There was no social media so we had to travel everywhere we wanted our songs to be aired. Channel O was the biggest international cable station and this song remained on No1 spot on the chat for several weeks. Then, Radio wouldn’t play u if u aren’t exceptionally good as they played more of western Artistes. But we reached out despite the limitations. We did almost the best dat was available at dat time. Every kid wanted to be like me.. Even the person in question wouldn’t say I didn’t inspire him. Besides 2face (African queen) , Dbanj (Oliva twist) and Ice prince (oleku) further established our music internationally. Thank God for wizkid and Davido as they have further broken bounds by building on these platforms and we are proud of them.. It will not end there as it is like a process. There are others coming that will do greater things too, but it is important that we don’t forget by tomorrow what these guys (Wizkid,Davido,Olamide etc) are doing today. It’s like saying Phyno is the originator of Igbo Raps, where will u place Nigga Raw, or Saying Olamide started Yoruba raps when we had lord of Ajasa. let’s always dish out the correct information when it comes to history of the Nigerian music industry. No Disrespect to my big brother AdeShope??

Nifemi is a graduate of the University of Lagos. He's a unique user of the pen when it comes to the expression of whatever. He is editor-in-chief of the organization and also a writer of news, articles, editorials and a lot more to help expand the level of knowledge of the readers and simultaneously have them entertained. A lover of music and football is who he is and a Man Utd die-hard.
Submit your comment
29 total pingbacks on this post
Learn More