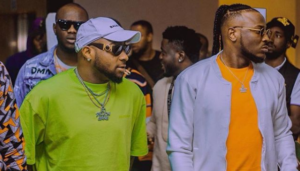 After the video of Peruzzi and the mystery girl on bed went viral online this morning, Peruzzi’s boss; Davido, has now commented on the video.

The DMW boss released a video on his instagram story blaming Peruzzi for the act and also welcoming him to the club where defamation of character his experienced from the hands of haters.