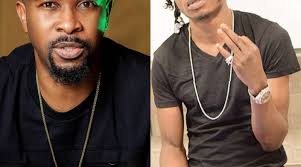 Rapper; Ruggedman has finally broken his silence on the arrest of Naira Marley and Zlatan Ibile by the men of the Economic and Financial Crimes Commission (EFCC) as he revealed reality has caught up on them.

The rapper had an interview with City FM yesterday and in the course of the interview, he stated that he was happy when he woke up to the news that Naira Marley has been picked up by the officers of the EFCC.

Ruggedy baba also revealed that Naira was really not wise as he allowed himself to be deceived by the people on social media who were supporting him after the statement he made about internet fraud not being a crime if the slave trade is to be put into consideration.

Ruggedy also wishes that the case of the “Issa Goal” singer serves as a lesson to other people glorifying “yahoo yahoo” and that he hopes also that they learn to always keep quiet and not uphold such despicable act.

? On Tuesday, the 26th of October, The trial of  Naira Marley, on 11 charges bordering on conspiracy, possession of...