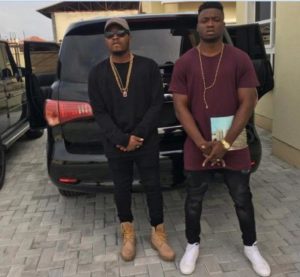 Brother of Olamide and prominent member of YBNL, DJ Enimoney, has been accused by a certain @forbesnominee, of attempted murder. The accuser made a post on social media narrating his ordeal in the hands of DJ Enimoney and staff members of popular club, Quilox.

The accuser, in his post, stated that the DJ and other YBNL crew members nearly killed him. He stated that he barely survived the attack and that he still carries indelible scars on a part of his body, only inches away from his heart. The accuser attached pictures of him receiving treatment to substantiate his narrative. He however added that he is still not sure of his health status and if anything happens to him, DJ Enimoney and the whole YBNL crew should be held responsible. He went on to solicit for help and concluded his post by saluting the owner of Quilox, Shina Peller. 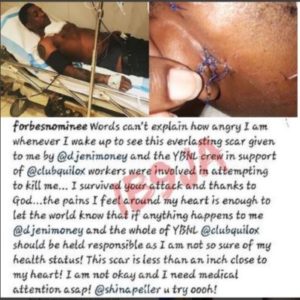 “”Olamide’s Brother, DJ Enimoney Almost Killed Me” – @Forbesnominee”, 5 out of 5 based on 1 ratings.