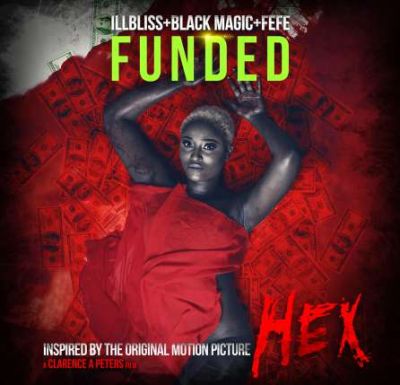 Popular music video director, Clarence Peters has concluded production of his latest project, HEX, and he has released the first single off the movie soundtrack album.
‘Funded’ is the lead single off the album and features Hip- hop heavyweight Illbliss alongside the eclectic Blackmagic and the super talented Ms Fefe.

“HEX’ : Original Motion Picture Soundtrack” is the soundtrack to the horror/thriller, directed by Clarence A. Peters, Africa’s most sought after music director/ cinematographer, in his film directing debut.

The album features nine original tracks, composed by some of the hottest acts in the Nigerian Music scene currently, and will be released officially on October 1, 2015 under The CAPitalHill/Goretti Company Music Imprint .

The featured artists include Illbliss, Phyno, Chidinma, Tha Suspect, Yung L, Ayoola, Monica Ogah, StormRex, Fefe and others.
‘Funded’ is feel good record from start to finish, guaranteed to keep everybody on their feet.