A prominent member of international pop group, Cold Play was grooving to one of the songs off Tiwa Savage‘s recently released Sugarcane EP.

In a video posted by Tiwa Savage on social media, the lead vocalist and guitarist of the group, Chris Martin can be seen dancing to the track titled Ma Lo, which features Wizkid and producer, Spellz Jammin.

The pop group had earlier endorsed the EP via a Twitter post, in which the EP was described as ‘wonderful’. 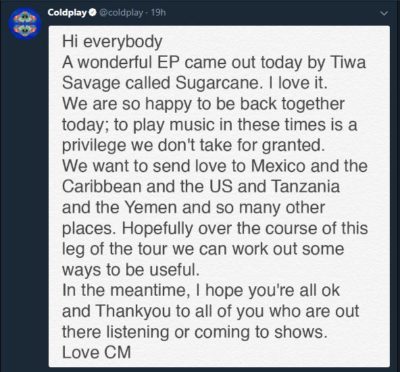