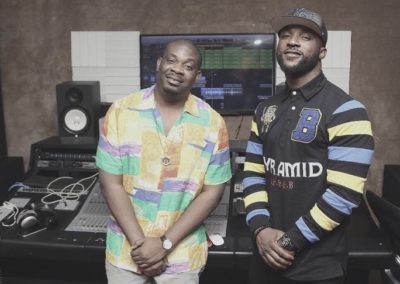 Recall that Iyanya joined Mavin Records on the premise that his chemistry with Don Jazzy would help get his music career back on track. Iyanya kicked off his Mavin’s journey with the release of Up To Something, which was later followed up with the release of an EP titled Signature.

The EP, well, had its fair share of airplay, especially when Temple Management Company got involved. However there were traceable signs that things just weren’t right between Don Jazzy and Iyanya. The first sign was the absence of Mavin’s involvement in Iyanya’s Signature EP tour.

More signs surfaced when Don Jazzy failed to wish Iyanya happy birthday on social media, not until the late hours of October 31st, the day the singer celebrated his 31st birthday. Now, Iyanya has released another track titled ‘Iyanu’ [Holy Water] and you’d expect that the artwork would carry the logo of the singer’s record label but, no. There’s no Mavin Records logo on the artwork.

Moreso, he did not work with any of the Mavin producers but chose to go outside to work with Black Jersey and Selebobo. From trying to connect the pieces, a question keeps popping up – could Iyanya have left Mavin Records without an announcement?