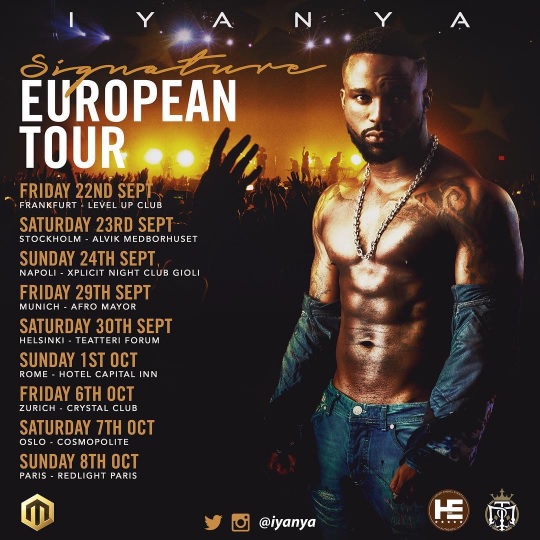 Mavin Records singer, Iyanya brings his Signature EP tour to a close with an international tour round major European Cities.

Among the cities the singer has been booked to perform are Frankfurt, Stockholm, Napoli, Munich, Helsinki, Rome, Zurich, Oslo and Paris.

The tour is packaged by leading talent agency, Temple Management Company who handles his affairs in collaboration with Europe-based Henry Emehel Events.

Since enlisting with his new management in July last year, Iyanya’s music career has turned for the better. The Mavin Records singer has continued to make wave with his EP entitled Signature released early in the year with popular tracks such as Up 2 Sumting, Hold On and Bow For You among others.

The successful Signature tour has taken the singer to cities within and outside Nigeria such as Abuja, Calabar, Nairobi, Kampala, New York and London among others.

Speaking ahead of his tour, the well-built artiste and dancer who traveled out of the country on Wednesday revealed how excited he was to reconnect with his Euorpean fans.

“I am excited to be back again to connect with my fans in the diaspora. I am looking forward to a magical experience, no more, no less.”