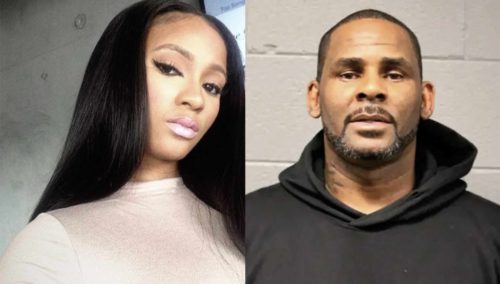 There are currently multiple investigations going on involving R.Kelly in the US, and US federal investigators are reportedly trying to prove that the singer compelled his girlfriend and alleged “sex slave,” Joycelyn Savage, to make false statements to law enforcement agents. According to TMZ, Jocelyn’s family claim that they have proof that R.Kelly told Joycelyn to lie if anyone asked her about their relationship and have given the documents to law officials.

DEFENDING R. KELLY . . . In an exclusive interview with @gayleking, #AzrielClary, 21, and #JoycelynSavage, 23, said they love Kelly even though their families claim he has brainwashed them. #RKelly #GayleKing

TMZ says that they’ve spoken to a law enforcement source close to the investigation and they’re asserting that when the US federal investigators who are looking into Kelly’s sex trafficking connections visited Atlanta last week and had a meeting with Savage’s family, they were given a bulk of digital evidence. Apparently, the family has records that show correspondences between Kelly and those that work for him, specifically a woman named Cheryl Mack.

The Savage family accuses Mack of being the go-between who set up a meeting between R.Kelly and Joycelyn in 2015 when she was 19-years-old.

Sources report that Mack made the arrangements for Joycelyn to get on a flight to Palm Springs to visit R.Kelly and that was the moment she decided to leave her life behind, move in with the singer, and become his girlfriend…all without telling anyone, including her parents.

The Savage Family also have been reported to have emails and text message records between themselves and Mack, as well as audio recordings of R.Kelly telling Joycelyn to lie if asked about their relationship.

In one particular audio tape, R.Kelly reportedly discusses in detail, how he and Joycelyn were to go about concealing their relationship. In another, TMZ claims that R.Kelly is heard asking Joycelyn to send him a text message stating that says she was lying, just in case she ever decided to rat him out.

“When I first met Robert, my parents told me to lie about my age.” — Azriel Clary . . . @gayleking spoke to #JoycelynSavage and #AzrielClary about living with #RKelly. Both families have denied receiving any payments from Kelly. See more on @CBSThisMorning Thursday.

There may even be social media documents and messages that reveal members of R.Kelly’s camp discussing how the singer used his employees to find and bring him young women. When TMZ asked Gerald Griggs, the Savage’s lawyer, if they had a statement in regards to these recent allegations, he said, “We are not going to continue to address anonymous rumors. From now on we are only going to deal with facts.”