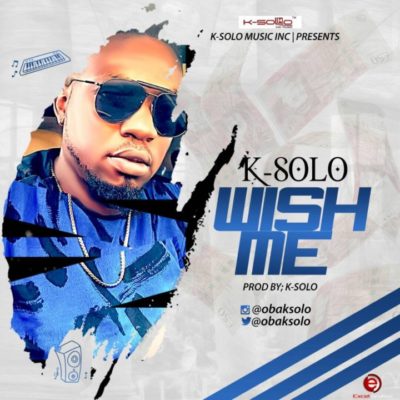 K-Solo – Wish Me Well. Having been championed by the likes of hits from other stars, K-Solo holds his Position as one of the leading African international music makers as one of the finest music producers to emerge from the burgeoning Afro Dancehall beats scene, and with over a million streams of fans across YouTube and Sound cloud already under his belt.

Nigeria based Afrobeats Music Producer K-Solo is proud to debut his long-awaited and highly anticipated debut single titled ‘WISH ME’.

‘WISH ME’ is a glorious and eclectic body of work that excellently merges African pop sounds, with a strong and distinct Street flavor, and Dancehall sensibilities, to deliver one of the most captivating Afrobeats melodies.

From the smooth opening LEAD SYNTH and dance floor filler, to the Dancehall-influenced hooks, K-Solo takes listeners on an imaginative genre-fusing musical melody that’s just right for the season.

Speaking about the inspiration behind ‘WISH ME’ K-SOLO says,
I tried to incorporate many different melodies and flavours into this record, as a reflection of the various lenses through which I view my world. This has played a massive part in me being able to bring my Afrobeats music to the world”