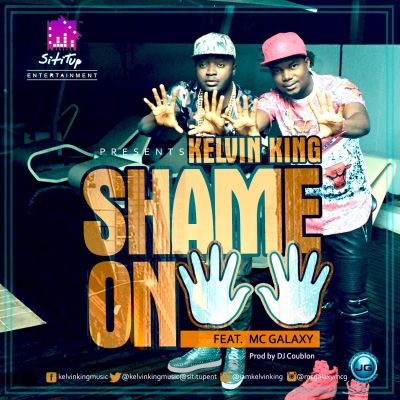 KELVIN  OLATUNDE AJENIFUJA – Kelvin King – is a multi talented and versatile artiste/Producer! He hails from Ipetu Ijesha, Osun State, had his secondary education at Agbor, Delta State and Osun State respectively before proceeding to Lagos to pursue his dream career (Music); Though, there’s hardly any genre of music he doesn’t attempt, he finds his strength in the contemporary highlife category which blends the usual afro hip hop with the typical Nigerian high-life-  just call it (21st century high-life).

Kelvin speaks about five Nigerian languages fluently, which gives him an edge when relating to his audience regardless of their tribes. He is also a natural freestyler as he has recorded over 50 songs off hand! He is presently signed to SITI TUP ENTERTAINMENT.

Listen to his latest studio effort  titled “SHAME ON YOU” which features the energetic dancer and singer, MC GALAXY;  produced by the renowned hit maker, DJ COUBLON.