Kizz Daniel’s “Madu” VS “One Ticket” Ft Davido – Which Is Your Favourite Record? 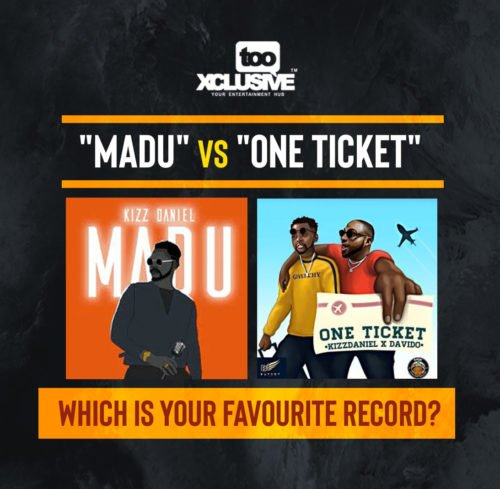 One shouldn’t ransack his/her brain too much over why Kizz Daniel is known for never having a bad song (or wait! does he have any? You can let me know in the comment section below) because of his exceptional talent and mind-blowing voice, and that is why in his latest album; “No Bad Songz,” there is that difficulty you encounter when you want to skip a track as they are all beautiful records.

Off the album are two exceptionally good records; “One Ticket” ft Davido & “Madu” which has only himself. Both songs are the two leading records on the “NBS” album as they are fans favourite. Listening to both songs, some feel “One Ticket” is a better record than “Madu” while others feel it’s the opposite.

But if i am asked to lay my own verdict on the two records, i would say both are great records and instead of having to embark on a journey that proves which is better, i would think it’s more palatable to ask which is a favourite of one.

So in line with what is above, i ask; which is your prefered record; “One Ticket” Ft Davido or “Madu” ?

Nifemi is a graduate of the University of Lagos. He's a unique user of the pen when it comes to the expression of whatever. He is editor-in-chief of the organization and also a writer of news, articles, editorials and a lot more to help expand the level of knowledge of the readers and simultaneously have them entertained. A lover of music and football is who he is and a Man Utd die-hard.
Submit your comment
30 total pingbacks on this post