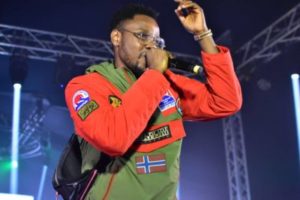 Kizz Daniel is surely more than enjoying the global recognition he is currently having since he left his former record label; G-Worldwide.

Kizz Daniel since leaving G-Worldwide has gone on to collaborate with both local and international superstars (what he was deprived of when he was at his former label) and this is bringing him the international recognition that he truly deserves considering his unbelievable talent.

Kizz Daniel released his much anticipated “NBS” album 2 days ago, and since it’s arrival; the awesomely packaged project has been amassing large numbers of streams and gaining international attention.

The album within 24 hours of its release, got over 100,000 streams on music streaming platform; Boomplay, debuted at no. 55 on US iTunes, and also debuted at number one on World album chart, making it the first Nigerian album to achieve such feat.

The excited singer shared this news via his social media pages.

“Kizz Daniel’s “No Bad Songz” Album Debuts At Number One On World Album Chart”, 5 out of 5 based on 1 ratings.

Nifemi is a graduate of the University of Lagos. He's a unique user of the pen when it comes to the expression of whatever. He is editor-in-chief of the organization and also a writer of news, articles, editorials and a lot more to help expand the level of knowledge of the readers and simultaneously have them entertained. A lover of music and football is who he is and a Man Utd die-hard.
Submit your comment
20 total comments on this postSubmit yours