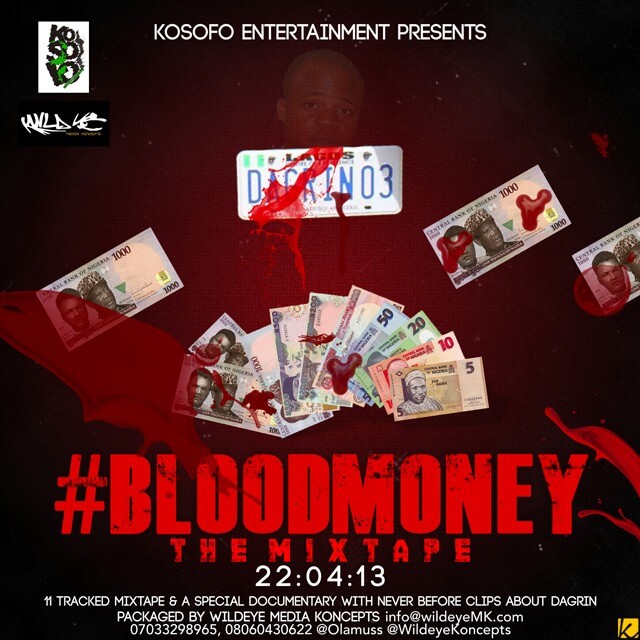 The growth of Hip-hop in Nigeria has witnessed a lot of trail blazers and game changers that have stepped up the game with differentcontroversial forms; however, no matter how the story is being told, the name Ólaitan Olanipekun aka DAGRIN will always matter.

It’s been three years since he passed on, but “oloro” as fondly called by his associates is still with us.

So in memory of keeping the name alive,KOSOFO ENTERTAINMENT is bringing  DAGRIN back from the grave with “BLOOD MONEY MIX TAPE”. This Mixtape was a brain child of the late rapper whose dreams was shattered in a fatal accident that claimed his life three years ago.

The BLOOD MONEY MIX TAPE comprises 11 tracks, 4 skits ,samples of his previous works and some of his never heard of works.

A documentary and never seen before video clips and stories from close people will also be released on April 22 2013.

The Project brought and packed by WILDEYE MEDIA KONCEPTS and speared headed by KOSOFO ENTERTAINMENT will exhume what most people don’t know about the late rapper.

The Mixtape will be produced by skilled producer  and late rapper’s close friend  SOSSICK and also on board is Nigeria’s  Beat Master and Mix Wizard LAY-LOW.

Different artiste from Nigeria,UK and the USA are already on board for the Project.

“Keeping his dream alive is the Motive”-Kosofo Entertainment.