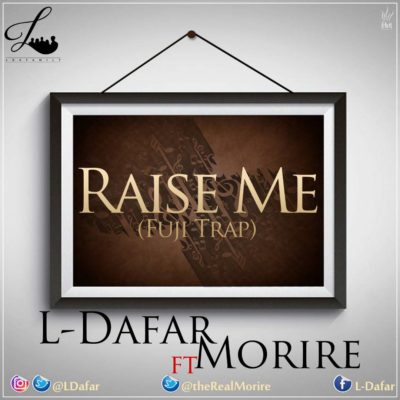 L-Dafar presents the visuals to his new single, “Raise Me (Fuji Trap)” featuring talented UK based singer, Morire.
L-Dafar had previously released a few songs including “Lera (ft Jarmeu)”, Oghene (ft Johnny Jayce, Kesh, Kiddominant), Hands Up (ft Labzy Lawal, Sheeni Meji) amongst others.
“Raise Me” would be his second gospel song. The first was Oghene which created an online buzz when it was released. “Raise Me” was originally a freestyle by L-Dafar, then it was changed, rewritten and re-recorded alongside Morire.
The song was composed by L-Dafar and Morire, produced by L-Dafar and mixed/mastered by Elkay.
For more updates, you can like L-Dafar’s official page on facebook, “L-Dafar”. Follow on Twitter and Instagram: @LDafar. Morire’s is @theRealMorire on Twitter and @mide01 on Instagram.
Get audio below