Larry Gaaga’s “Doe” ft Davido Vs “Low” ft Wizkid… Which Do You Prefer? 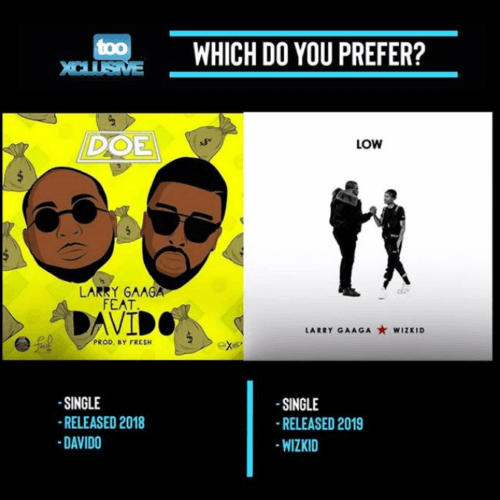 Larry Gaaga is a household name in the music industry, thanks to his influence at being able to collaborate with the biggest music artistes in the Nigerian music industry whenever he wants to.

In 2018, he collaborated with Davido on a banging single; “Doe” which was well received by music fans and now in 2019, he has collaborated with Wizkid on a brand new jam; “Low” which also is getting positive remarks from listeners.

But due to the rivalry between Davido and Wizkid, fans have taken to spring up an argument about which of the records “Doe” & “Low” is a better one; some believe with “Doe,” Davido gave Larry Gaaga a greater song while others feel Wizkid gave Larry the better song with “Low.”

However, we would like to have your take on which is the better song. Larry Gaaga’s “Doe” Ft Davido Vs Larry Gaaga “Low” Ft Ft Wizkid – Which Do You Prefer?

Nifemi is a graduate of the University of Lagos. He's a unique user of the pen when it comes to the expression of whatever. He is editor-in-chief of the organization and also a writer of news, articles, editorials and a lot more to help expand the level of knowledge of the readers and simultaneously have them entertained. A lover of music and football is who he is and a Man Utd die-hard.
Submit your comment
90 total pingbacks on this post
Popular Posts