Legendary Musician, 9ice, Prostrates For Davido On Stage At The “City of Davido” Concert In Lagos || Watch Video 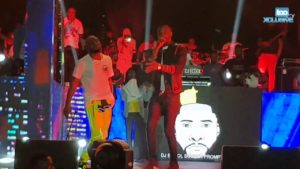 Legendary musician, 9ice, was available to support Davido at his recent concert that was held at the Eko Atlantic in Lagos.

The musician joined Davido on stage as he performed some of his evergreen songs and “Living things” remix in which he featured the OBO.

The crowd was really blessed with a top class performance from the “Gongo aso” singer. But one thing that shocked the watching crowd was when nice took to the ground to prostrate for Davido in a moment some people term as “madness” while others consider(ed) it “beautiful.”

Watch video below and have your say.

“Legendary Musician, 9ice, Prostrates For Davido On Stage At The “City of Davido” Concert In Lagos || Watch Video”, 5 out of 5 based on 1 ratings.

Nifemi is a graduate of the University of Lagos. He's a unique user of the pen when it comes to the expression of whatever. He is editor-in-chief of the organization and also a writer of news, articles, editorials and a lot more to help expand the level of knowledge of the readers and simultaneously have them entertained. A lover of music and football is who he is and a Man Utd die-hard.
Submit your comment
12 total comments on this postSubmit yours
Popular Posts