Maestro Vic – Nobody Else 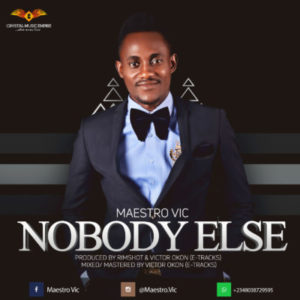 Maestro Vic, a Port Harcourt based gospel Afrocentric Soul, Pop and R&B Artiste has been off the studio since after the release of his debut single in 2014, shortly after he went solo from hip-hop/R&B group Unique Soul, a group he founded.

The multi talented Maestro Vic, who is originally known as Victor Effiong, is a Singer, Songwriter, Voice Coach, Music Producer and Director and has also been a judge in several talent hunt shows that have produced many great artistes in Rivers State.

He is also a journalist (news correspondent, editor and media consultant) and studied Linguistics and Communication Studies in the University of Port Harcourt.

Vic is from Akwa Ibom State but was born and bred in Rivers State, Nigeria.

“Nobody Else” is a brand new single from Maestro Vic released under CME Records imprint.

“Nobody Else” is a mid tempo gospel song with a Soul and Rock combination, and it is designed to keep every listener connected to God, the source and essence of life.

The powerful vocals behind the song and the unique instrumentals will keep you glued to putting it on constant replay.

Maestro Vic – Nobody Else