Maiden edition of Ajegunle to the world to hold on September 10th 2017 at Landmark Centre Lagos. 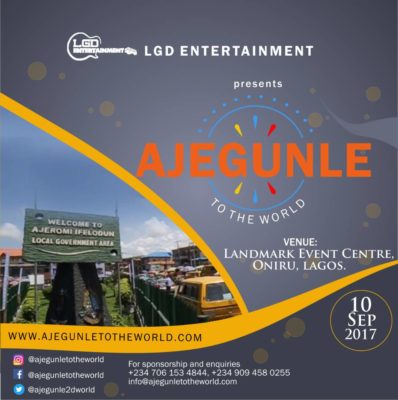 The maiden edition of ‘Ajegunle to the world’; a showcase of success stories and celebration of the beauty and development in Ajegunle aimed at celebrating a land with raw and untapped treasures is set to hold in September 2017 in Lagos, Nigeria.

Ajegunle to the world is a project that is beyond just showcasing talents of the Old and New but also expose the distinguished and multi-farious culture,ethnicity and people of Ajegunle that has played a major role in the development of the entertainment industry from music, football, movies etc.

Ajegunle as the name implies in Yoruba language, where the name was derived from means a place where riches dwells. In other words a land with raw and untapped treasures (talents)

With this project we aim at aiding what government is doing in Ajegunle by empowering the youths via business and entrepreneurship seminars, football clinics, and music mentorship

The event is an LGD Entertainment production and its packaged by Motbensonz Solutions.