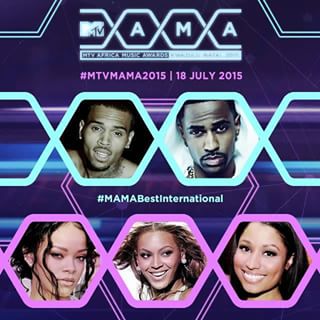 MTV Base has revealed that Beyoncé, Big Sean, Chris Brown, Nicki Minaj and Rihanna have been nominated for Best International Act at the MTV Africa Music Awards KwaZulu-Natal 2015.

The urban giants will go head to head at MAMA 2015, which is sponsored by KwaZulu-Natal in association withAbsolut Vodka and in partnership with The City of Durban.  The winner, chosen by music fans voting online at http://mama.mtv.com [1], will be revealed at the live awards ceremony on Saturday 18 July at the Durban International Convention Centre, Durban, KwaZulu-Natal, South Africa.

The MTV Africa Music Awards 2015 will broadcast live across Africa on MTV Base (DStv channel 322), MTV (DStv channel 130) and BET (DStv channel 129) on Saturday July 18, 2015 at 9:00PM. The show will also be transmitted worldwide on partner stations and content platforms including BET International from 18 July. In addition, a special MAMA-themed edition of MTV’s acclaimed World Stage franchise will air globally on MTV channels around the world on 27 August 2015.