DMW’s prince of vibes, Mayorkun, has of late been engaged with MAYOR101 – a school tour that has seen him turn up to deliver thrilling music performances at learning institutions including the Obafemi Awolowo University, The University of Nigeria Nsukka, Babcock, Bells and Bowen universities, the Ladoke Akintola University of Technology, Joseph Afe Babalola University, the Dowen College… just to mention some.

While we’re still reeling in the frenzy of his most recent release ‘SADE‘ produced by Masterkraft, he has shared on the gram, a snippet to his upcoming sound using the caption: Your Mama Born You Well

? Your Mama Born You Well ?

The chune has got fans ecstatic for it’s release as they have began showering the ELEKO crooner with positive comments and remarks on his IG page. Even label boss, Davido had commented: HIT!!!

Mayorkun already confirmed in a tweet that the banging sound is titled “MAMA” and produced by Kiddominant. 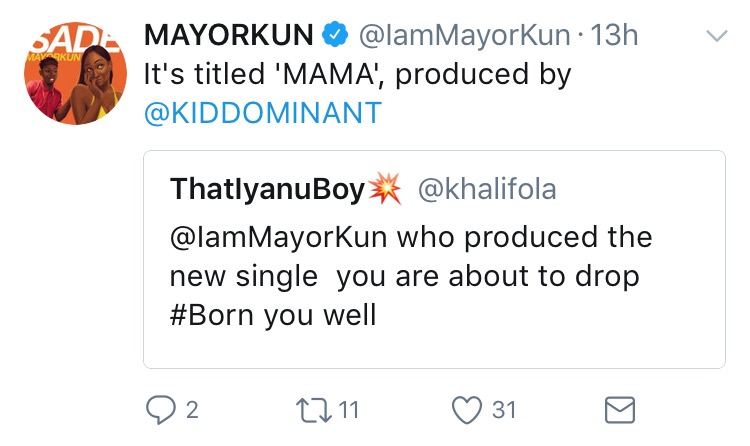 “Mayorkun’s New Music #ISSAHIT! Watch Snippet Here”, 5 out of 5 based on 1 ratings.