MC Galaxy, is bent on making his mark in the music industry following his recent relations with some Hollywood stars. 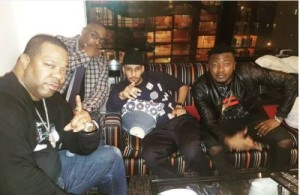 The singer, to Instagram to share a photo of himself with Busta Rhymes and Swizz Beatz. He tagged the picture:

Recall, Swizz Beat and his wife Alicia Keys approved the video to his new single,’Hello,’ It however seems Swizz Beatz is working on his  (MC Galaxy) new album and he might be recruiting Busta Rhymes to feature on it too. 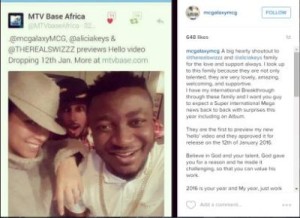 “MC Galaxy Hints At New Collaboration As He Chills With Busta Rhymes And Swizz Beatz”, 5 out of 5 based on 1 ratings.

Tope Delano, is a creative content writer/editor at tooxclusive.com. She is a graduate of English and Literary studies who enjoys writing and listening to music. When she is not writing or listening to music, you will definitely find her reading or watching a romantic comedy movie
Submit your comment
1 comment on this postSubmit yours