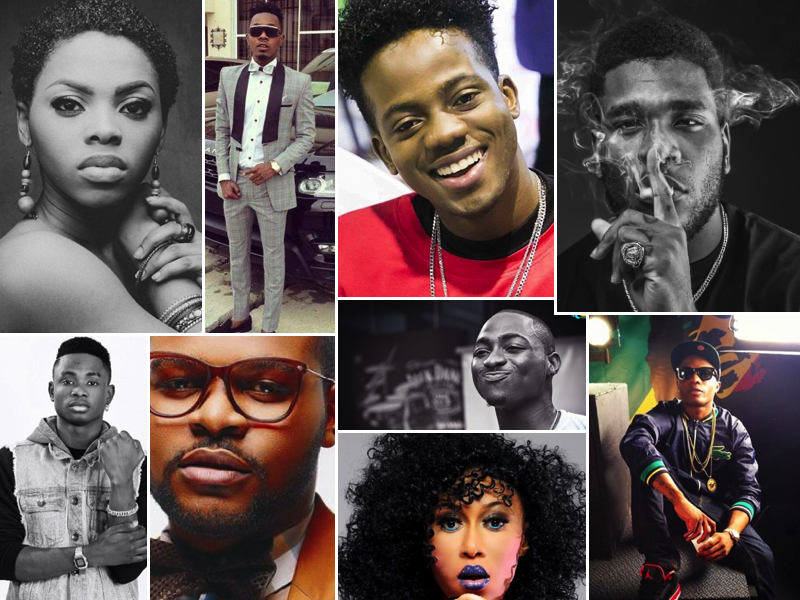 The Nigerian entertainment industry has been making it’s buzz locally and internationally, and the influential Nigerian artists under 25 are pulling their weight despite their age. Finally,on a very long creative journey our artists have been finding their unique voices, and have created a niche for themselves, individually and have influenced the youths of the moment.

This is based on the past year and the time of writing this article, ladies and gentlemen, here are Nigeria’s most influential artists under 25.

You know this list won’t have started if Wizkid isn’t at the top, undoubtedly one of Africa’s most promising acts for the future. Ayodeji Ibrahim Balogun, better known as Wizkid, would be turning 26 mid year. He is a recording artist, songwriter and performer. He has won a BET Award, a MOBO Award, three Headies Awards, two Channel O Music Video Awards, four Nigeria Entertainment Awards, a Ghana Music Award, two Dynamix All Youth Awards, two City People Entertainment Awards, and a Future Award. He has been nominated three times at the MTV Europe Music Awards as well as four times at the World Music Awards. He was ranked 5th on Forbes and Channel O’s 2013 list of the Top 10 Richest/Bankable African Artists. In February 2014, Wizkid became the first ever Nigerian musician to have over 1 million followers on Twitter. Last year, international acts Swizz Beats and Alicia Keys showed his music love and he featured Drake and Skepta in his popular hit ‘Ojuelegba‘.

Probably the most underrated musician in the Nigerian music industry,  Damini Ogulu popularly known as Burna Boy, is a Nigerian reggae-dancehall singer and songwriter.  He won Nigeria Entertainment Awards Best New Act of the Year in 2013. He has various international collaborations to his name. He has given way to acceptance of different genres and remains the ever budding performer.

Ms Kedike rose to stardom after winning the third season of MTN Project Fame West Africa. In 2012, Chidinma won the Best Female West African Act category at the 2012 Kora Awards. You would mostly find Chidinma as a feature artist on other songs, but her musical prowess and her petite physique has earned her a spot on our list.

YBNL soldier Keshinro Ololade, is a singer, rapper and songwriter. He rose to fame after his chart-topping song titled “Shoki” rose to critical acclaim from music critics. He has been releasing hit singles like Efejoku, Lyrically, Gbesere, Is It Because I Love You, the youngster doesn’t have an album yet but this year holds promises for Lil Kesh.

Patrick Nnaemeka Okorie is a Nigerian reggae-dancehall singer and songwriter who came into our lives with ‘Alubarika’ and has been keeping the dance hall alive. He has won 3 Headies Awards, 1 2014 Channel O Music Video Awards and Nigeria Entertainment Awards. “My Woman My Everything” featuring Wande Coal was his hit track for 2015.

Folarin Falana didn’t just get into the scene in 2015, his unique sense of rap and his skits on social media only complemented his hit track “Marry Me” (featuring Poe and Yemi Alade). He currently owns an independent record label called Bahd Guys Records.

Cynthia Ikponmwenosa Morgan, popularly known by her stage name Cynthia Morgan, her music is a fusion of pop, hip hop, dancehall and rap. The unique vibe of the German Juice musician, has made her highly influential for her music genre. Cynthia Morgan has won 1 Headies Award.

Currently signed to Mavin Records. He is best known for his hit single “Godwin”, a semi-gospel and pop song which topped many music charts in Nigeria. Korede Bello had a good year in 2015, he won 1 Headies Award in a category nobody expected him to. Hope this year only gets better.

Culled from The Guardian

I have magic in my hands and I'm excited to be sharin' it with the world.
Website
Submit your comment
1 pingback on this post
VIDEO OF THE WEEK