Is MI Abaga The Greatest Nigerian Rapper Ever?

Previous: Ric Hassani – Only You 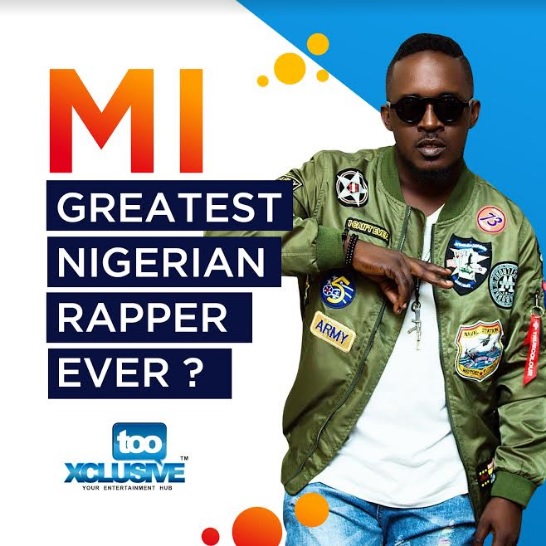 There was a time in Nigeria when what we called rap was mostly mumbling of words. There was not much of the metaphors, the fluidity and imaginativeness that is enjoyed in Nigerian rap today. There weren’t many rappers in those days, and the few that existed struggled to sell the music genre to the Nigerian audience, most of whom were reluctant to try anything other than the conventional Afro-Pop music. Pitching rap to Nigerians then, was like trying to sell ice to the Eskimos.

In those days, the rappers that we had were either too unimaginative for the real hip-hop heads or they used too many big words, that the average Nigerian music lover found it difficult to grasp and appreciate the content of their music. Nobody seemed to be able to be put together the perfect model of rap music that could gain acceptance in Nigeria and the respect of music lovers outside Nigeria. Nobody, until M.I appeared on the scene with Safe.

M.I’s Safe was a sample of Nigerian rap music that the fans fell in love with and accepted, almost totally. It was catchy, perky, yet the lyrics to the song was rich. M.I did a mashup of fan-favourite songs at the time, to create an amazing freestyle that later became everyone’s favourite song. With Safe, M.I got the right market formula that got people to look in his direction, wanting to listen to his musical offering.

M.I became successful with Safe but his success was not prima facie. His debut song, Crowd Mentality, with its poetic nature and its effect of getting the cheers of the crowd, was mostly popular in Jos, his homeland. It was the follow-up songs like Safe, Short Black Boy, Fast Money Fast Cars that really helped his name spread in the rap campaign.

IN CASE YOU MISSED IT: 5 Celebrity Fights That Shook The Industry

Like Kanye did with The College Drop Out and Kendrick did with Good Kid MAAd City, M.I’s Talk About It album had a seismic impact on the industry with its commercial success. It was said that over 30,000 copies of the album was sold in the first 30 minutes of its release. It was a miracle for a rap album to sell at that rate in Nigeria, and at that time. It was like the manifestation of a prophecy, because as soon as it was released, the whole industry was talking about it. The success of the Talk About It album made M.I one of the vanguards of what would become the new age of rap music in Nigeria.

The short black boy from Jos went from Talk About It to making hundreds of amazing rap songs, getting featured on many others and till today, he still has the mic in his hands. He has put together two other commercially successful and critically acclaimed studio albums, M.I2 and M.I3 (The Chairman). To attest to the dominance of M.I in the area of compiling rap albums, I’d point out the fact that he won the Headies award for best rap album for each of his three studio albums. How often do we get to see this?

More so, M.I would remain a celebrated figure in the rap circle for fronting one of the best rap groups Nigeria has ever known, the Choc Boys. The M.I led and inspired group made some of the biggest and most impactful songs released by any Nigerian rap group. The influence of M.I in the group cannot be overplayed. He was the big brother, the mentor, the label boss; something like Jay-Z to Kanye West. Together, the Choc Boys were brilliant, and individually, they are accomplished artistes.

In his journey to becoming a rap great, a journey that has spanned over thirteen years, M.I started a series of mixtape releases that he titled Illegal Music. Except you choose to hide the truth, you’d agree that Illegal Music 1, 2 & 3 are some of the best mixtape albums you’d find around here. The arrangement, the depth and the overall beauty of the art is appreciable in each of the mixtapes. In one of the songs on Illegal Music 2, M.I said, “tell me what it costs to be great, I’d pay the whole bill”. This rap line describes M.I’s sacrifices and contribution to the rap game. It tells how much M.I has given, to sit on the exalted seat that he occupies today.

Part of his legacy is the number of artistes that he has rolled down the ladder for. I first got to listen to Wizkid, Jesse Jagz, Boogey, Koker, Shaydee on M.I’s projects. Some of these artistes lit their torch from there and now, they stand on the biggest stages of world music, shining the light for the world to see.

ALSO READ: 10 Artistes That Have Promoted Fraudsters With Their Music

One of the things that make legends is the range of impact they make with their works and M.I has been able to inspire a new generation of creative minds; artistes, poets and writers to search the deepest places for beautiful elements of African art to show the world. Even till today, his concluding words in Crowd Mentality remains a work of reference for hustlers and soldiers of destiny. His message is for you to;

“Be yourself Yo!
Be Black, Be Beautiful, Be Strong,
Be Correct, Be Nice, Be Good
Be Right, Be Tight, Be Alright
Be Creative, Be Native, Be Real
Have Skills, Stand Tall
And be all you can be.”

Like the seasons, rappers come and go, but the legacy of M.I would live long after him. It is pleasing to see M.I still active, making music and enriching the rap culture in Nigeria. Rap is today, one of the most marketable music genres in the industry and the works of M.I stand in the frontline with the bestsellers and most impactful of all time.

Not all heroes wear capes. Not all legends are in heaven, some still live amongst us. One legend still entering the booth and climbing the stage today is the Music Innovator, the Most Immaculate, Mr Incredible, M.I.

“Is MI Abaga The Greatest Nigerian Rapper Ever?”, 5 out of 5 based on 1 ratings.