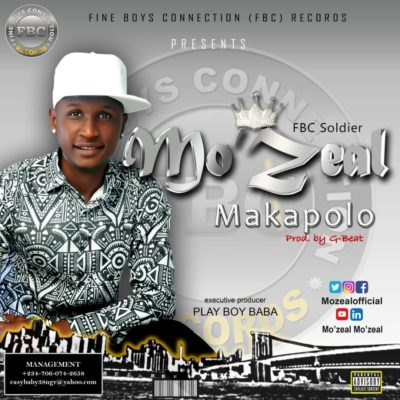 Born Moses Ochapa on 13 May 1995 in Wamako LGA of Sokoto State to the family of late inspector William Ochapa Orinya hail from Ado LGA of Benue State (Idoma Tribe) Mo’zeal grew up in Jos, the capital of Plateau state where he discovered and launched his music career as a teenage Third and last born of his parents, Mo’Zeal picked his interest in music as a kid at Rwang Pam memorial schools, where he had his primary education. Identifying his rare talent , he was enrolled into the church and school choir where he further improved on his talent, leading to several foundation performances and recognition among his peers in his school, church and the street of Jos.
In 2006, Mo’Zeal played a major role in his school choir winning a N200,000 cash prize as 1st runner-up in the Mr Biggs inter-school national music contest in Lagos. After this huge achievement his “ZEAL” for success increased giving birth to the stage name “Mo’Zeal“
Mo’Zeal’s dream-chasing paid off when he was spotted and got signed to Fine Boys Connection Records (FBC) in June 2017 by the CEO, PlayBoy Baba. Within
his first year of signing, Mo’Zeal recorded ten songs for the label and his deemed ready for the industry.
His debute single Makapolo was inspired by the famous luxurious bus (board by travelers across the country when he finally embaked on his journey from Jos to Lagos to kick-start his music career with the (FBC) label. Makopolo was produced by one of the top music producers in Jos G-Beat, mixed and mastered by DJ Willie O of Hypertech Music.