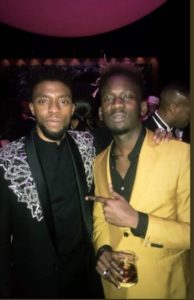 Mr. Eazi met with Hollywood stars at the recently held Vanity Fair Oscar Party. The singer shared pictures he took with some of the International stars present at the event and they include P. Diddy, Drake, Chadwick Boseman, Lupita Nyong’o and a number of other actors in the record-breaking Black Panther movie. Mr. Eazi looked particularly excited to meet Kenya-Mexican actress, Lupita Nyong’o, as he made it evident in his caption of their picture which read,