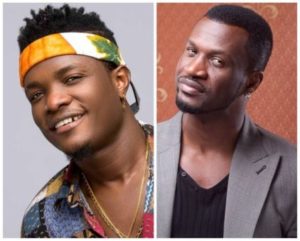 Mr. P has been dragged into a hot social media mess by an aspiring music star who goes by the name, Henry Knight. The budding singer recently called out Mr. P for stealing his song, Ebeano.

Not too long ago, Mr. P released a song titled Ebeano and it has been enjoying a fair size of buzz which unsurprisingly skyrocketed after a budding singer, Henry Knight, came out to say the superstar stole his 2015 single to make his (Mr. P’s) latest release. Curiously, the title of Henry Knight’s single is similar to that of Mr. P’s new release.

Henry Knight released a lengthy post, expressing his disappointment at Mr. P and other superstars who he said rips-off younger artistes. He also put out details of his songs like the release date, the name of the producer and claimed that Mr. P ‘copied the hook of the song’ without giving him due credit. He cited the instance of Davido and how he credited Teni for writing his 2017 hit single titled Like Dat, using it to admonish Mr. P. He concluded his post by borrowing Davido’s now famous mantra, ‘we rise by lifting others’, asking Mr. P to take a cue from it. 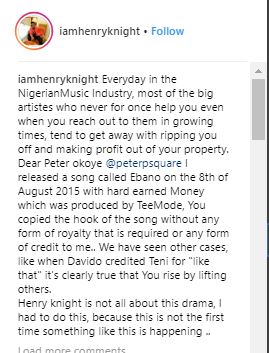