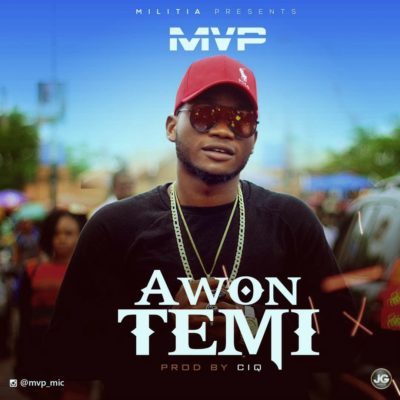 After the release of his E.P last year, ‘TUSH’ (Turnt Until Something Happens), with singles that featured  YCee, Toby Grey, Koker and more. MVP drops the much anticipated single and his first song of the year, “Awon Temi”  – a term in the modern Yoruba street slang for “Where My People At”. MVP recruits Jagz Nation’s producer,  CiqSounds on the beat, uses his lyrical prowess and creative mind to fuse this afro-trapped hip hop song, “Awon Temi”. Awon Temi unleashes the current state of mind of the independent young rapper ahead of his rumoured anonymous mixtape to drop come October.

With his cover of “Who You Epp” and the Tush E.P, MVP has gained support and been recognized by the likes of Olamide and Jesse Jagz in recent times. This song will not only get you motivated, but will also let you see the need to support your own! This is undoubtedly the hottest Nigerian Hip-Hop Song in 2017. Download, Enjoy and Share!      ”
Thank you so much for your time.
twitter and Instagram handle @MVP_MIC

Looku Looku, Dorobucci, Adaobi, Which Is Your Favourite Mavin Record?