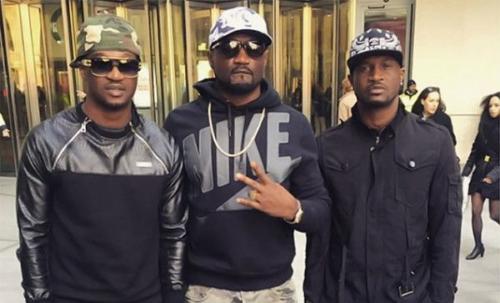 Former Co-member of the defunct music group, P-square; Peter Okoye popularly known as Mr P since he went solo has revealed that himself and his elder brother; Jude Okoye, famously know as Jude Engees are not on talking terms.

The singer revealed this while on an interview where he spoke with Dotun of BeatFM. He said this when the OAP reminded him that the day he was having his interview was the day is older brother’s (Jude) was celebrating his birthday, he pressed further by making a request to Mr P, asking if he would love to wish him a happy birthday.

Dotun then quizzed him on if they talk and he responded; “No we don’t.”

Jude according to reports is one of the reasons P-square has stopped existing as he was unable to quench the family issues that led to the end of the music group. People felt when Mr P and his Twin brother; Rudeboy had issues, Jude took sides with Rudeboy condmning Mr P and his wife, Lola Okoye publicly which made him infuriated and proposed that they end P-Square.

Since then Rudeboy and Mr P have not been on talking terms as they now see each other as rivals and enemies.