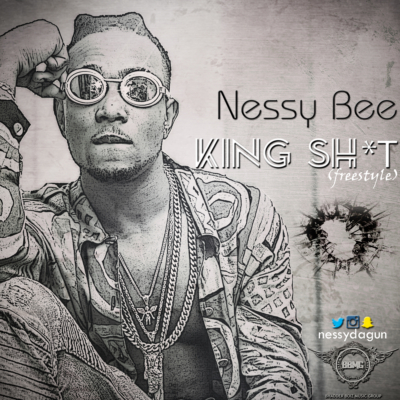 2016 has been a vibrant/sure-fire year for the Bharder Boiz Muzik Group recording act by the name, Nessy Bee; having kicked off with the audio/visual for his teeming single titled “Ori Owo,” he went on ahead to release the birthday-themed tune titled “Ojojumo Aye” – having been on the scene for a while now, it was only right when he merged with producer Chimbalin and the “Call the Police” crooner, Orezi, for his recent and still hard-hitting/thriving single titled “Fantasy.” In a bid to keep his relevance within the Nigerian music industry scene, Nessy Bee switches up the ante as he lets out this vicious freestyle titled “King Sh*t“; teaming up once again with producer Chimbalin, the Bharder Boiz Muzik Grouprecording artiste serves and sets down one of the most eager and keen freestyles so far in the year 2016 and in what’s seen as a challenge/battle, he sure seems to be calling out other Rap acts in a bid to jump in on this and deliver their version but until that claim is enact, listen up, watch and share your thoughts on this tune as we anticipate the official visuals for the Orezi-featured “Fantasy” tune. | ENJOY!!!