Finally, Davido, revealed the life changing news to all his fans yesterday, he got himself a huge record deal with Sony Music Global.

The ‘The money’ crooner took to social media to share the news. He wrote:

TO ALL THOSE THAT DOUBTED ME!! ITS A DONE DEAL! 1ST AFRICAN ARTIST TO SIGN A GLOBAL RECORD DEAL !! MY STORY IS JUST STARTING!! MY MOTHER IS SMILING IN HEAVEN RIGHT NOW!! SONY MUSIC ENTERTAINMENT !! OWO TI WOLE @sonymusicglobal.

Following his announcement, several Nigerian artiste have also taken to social media to congratulate him. Some of them include, Phyno, Patoranking, M.I, to mention a few. 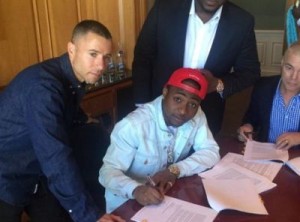 Big shout out to @iam_Davido .. Huge step for African music and our journey to the top!