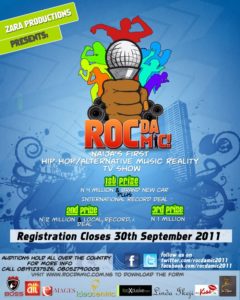 Tryna be Creative ain’t easy, U’ve gotta watch me always like TV” I love that line; a certain “@I am psycho_1” sent that line when Rocdamic had a punchline contest on twitter. Let’s for a minute forget the rhyme and just read that particular line again…. (Oya, time up). That line literally spoke the minds of a lot of young talented people that do hip-hop or Music, people that all they ever wanted was to be creative doing what they know best and be watched on television by a large audience. This large group of people have only had the chance to rap or sing in their bathrooms while admiring their reflection in the mirror or in a gathering of friends or maybe a small gig of about fifty people and all they had gotten in return was a pat on the back, a word of compliment, or maybe an imaginary applause from millions of people while they hold on to a toothbrush in their bathrooms (oya, confession time…. you are guilty of the toothbrush thingy abi or is it chewing stick you use?)

So, do you want to be watched on TV? Do u want millions of viewers tuned to watch you each week for thirteen weeks? (Not the imaginary ones in your bathroom). Are you creative or talented? Have you been waiting for the right opportunity to “show yourself”? Well, your time is NOW. Sign Up for Nigeria’s first ever Hip-hop alternative reality TV show and get that chance you’ve been hungering for.

Roc Da Mic, (if you haven’t already heard about it) is a reality show that will be aired on Nigerian TV and also Cable TV; it is the first of its kind and promises to be exciting. Not only does it cater to a different set of young artists, it also takes on the whole Reality TV show thing from a different angle.

Well, WE ARE LOOKING FOR YOU!

Just in case you aren’t able to download the Registration Form, forms will be made available at the auditions for those with just their teller.

This is what you stand to gain:

Second Prize: 2 Million Naira, plus a Local Recording Contract worth Millions of Naira

Registration closes on the 30th of September 2011, so go register and stop hesitating.