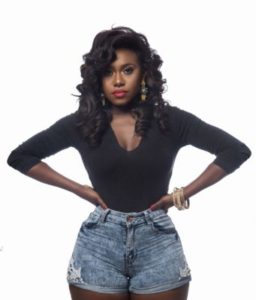 Singer, Niniola took to Instagram to celebrate ace producer, Cobhams. The songstress shared her picture with the producer and a teaser on how he influenced her music career. Cobhams is credited for helping Niniola find confidence in her songwriting ability, which has become one of her most appealing traits as an artiste.

There is a lore about how Niniola’s song writing ability was brought under question by judges at a talent show in which she participated in. Of the team of judges at the show, Cobhams was said to be the only one who saw promise in Nini’s songwriting ability and he encouraged her to make the best use of her unconventional writing style, which she has now harnessed into creating hit records like Maradona, Sicker and Ibadi just to mention a few.

In her Instagram post, Niniola referred to Cobhams as a legend and she asked for more blessings for the quiet producer. For her post, she used the caption;

“The Legend @cobhamsasuquo gave me the confidence to be the unconventional songwriter that I am Today…. (Story for another day) God bless you”

The Legend @cobhamsasuquo gave me the confidence to be the unconventional songwriter that I am Today…. (Story for another day) God bless you #NINIOLA #NAIJAREVIEW #DRUMROLL #QOAH