No One Slapped Me – Davido Denies Being Manhandled By S/African Actress, Boity

It was recently reported that Davido saw hell during his recent trip to Zimbabwe. Not only was it said that his performance was marred by fighting in the audience, Davido was also dealt with by a certain South African actress named Boity, according to multiple reports but the singer has come out to refute the story.

The news that Davido was involved in a fracas with Boity, hit the internet by storm. According to the story, Davido made advances at the beautiful actress in a way that she found offensive and she reacted by throwing tantrums at the singer. It was also said that the actress manhandled Davido during the fracas, infact there are rumors that she slapped him before they were separated.

However, Davido has come out to say the story is all fake. The singer dropped a comment in the comment section of popular news blog, Instagblog9ja, stating that the story is fake and that he has worked too hard to be brought down with such baseless story. His comment read;

“FUCK OUTTA HERE!! I WORK TOO HARD FOR FAKE NEWS LIKE THIS TO BE COMING OUT! NO ONE PUT HANDS OR DISGRACED ANYONE!!! U NO GO POST BETTER THINGS! KARMA COMING! I’m up as fuck! DEAL WITH IT OBO AINT GOING ANYWHERE FOR A WHILE”

From his comment, Davido did not deny that the fracas never happened. He only stated that no one put hands on anyone perhaps hinting that he was not slapped as it was said in the earlier circulated story. It is however still unclear what transpired between Davido and Boity but we are looking into the story and we hope to report more angles to it as soon as they are uncovered. 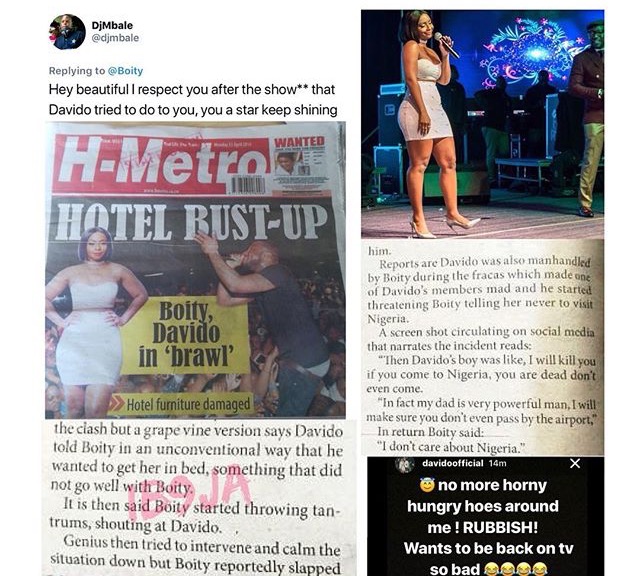