“Ojuelegba, “Come Closer,” “Holla At Your Boy” – Which Is Wizkid’s Biggest Song Ever? 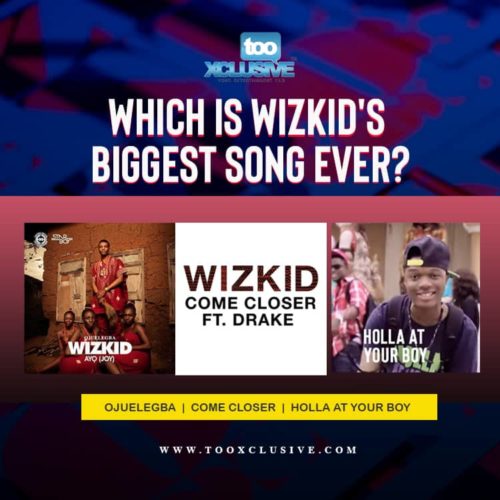 Wizkid is arguably Africa’s biggest artiste with loads of hit songs released and spread all across the continent. The biggest challenge anyone could ever have regarding Wizkid’s music career is trying to count the number of hits songs he’s released or even identify them. His hit songs are numerous and he seems not to be slowing down at all.

Wizkid came officially into the music industry in 2010 and since then, it’s been a journey of a roller coaster for the talented superstar. With a decade in the music industry, he has gone on to become an international artiste, featuring the biggest superstars in the the world of music and receiving numerous awards. Wizkid has some of the biggest songs that Africa have ever experienced. However, of those songs, there are three that stand out and these three songs are his biggest songs ever.

Below are the three shortlisted songs:

This song was released off Wizkid’s sophomore album; “Ayo” in 2014 and became so huge that even American superstar, Drake and British star, Skepta jumped on it to make a remix. It was produced by Legendary beatz.

This song was dropped in 2017 featuring American superstar, Drake. This song which was produced by Sarz became the first Nigerian music video to hit one million views in 24-hours and till today becomes the most streamed African song on Spotify.

“HOLLA AT YOUR BOY“

This song forever would be remembered by Wizkid and music fans. A song that introduced him officially to the music scene, a song that switched the attention of music followers to Wizkid and gave him chance for his talent to be heard. “Holla At Your Boy” is a big part of Wizkid’s life and it surely would be a lifetime jam.

However, of these songs, we would like to know which the biggest is – “Ojuelegba, “Come Closer,” “Holla At Your Boy” – Which Is Wizkid’s Biggest Ever Song?