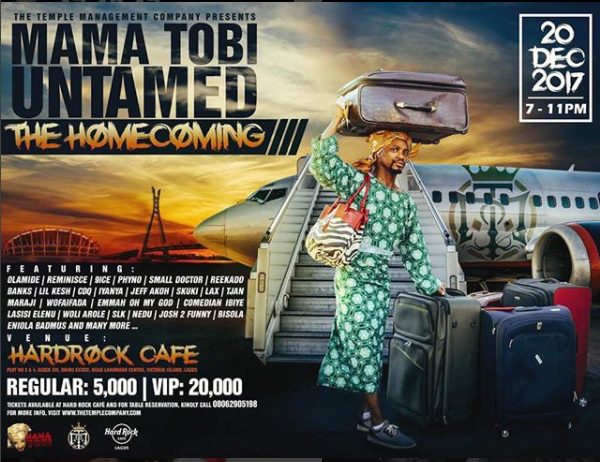 Packaged by Temple Management Company, the event promises to be a night of drama and entertainment enriched by live stage comedy skits that has established Mama Tobi as one of the toasts Nigeria’s growing internet comedy craze.

“They have seen me do video skits but this is going to be different ball game where I will do my serve it live on stage,” Mama Tobi said excitedly.

Joining Mama Tobi to entertain on the night are musicians including Olamide, Phyno, Reekado Banks, Small Doctor, 9ice, Bisola, Jeff Akoh, L.A.X and CDQ among others. Also to spice up the occasion with rib-cracking jokes and comedy skits are Maraji, Lasisi Elenu, Josh 2 Funny, Woli Arole, Kenny Blaq, Wofaidada and Emma OhMaGod among others.

Speaking about the show, the host explained further, “We have done it outside the shores of the countries and there is no better time to bring it to homeland than now. This event is a direct response to my fans who has been asking when I plan to bring this unique experience to Nigeria. With my team, The Temple Management Company (TMC), I can only tell Nigerians to watch out for something unique this Christmas.”

Also lending his voice, Mark Redguard, Head Of Entertainment, TMC, assured that the Mama Tobi Untamed show will tackle serious social issues in some of the most creative and humorous way typical of the comedian. “As with anything we do, we are giving all our support to our talent just as we also plan to make this show a reference point.”