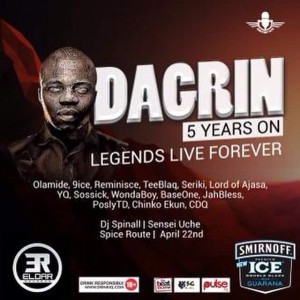 A 5th year memorial concert will be held in honor of late rapper, Dagrin – real name, Olaitan Olanipekun who died on April 22, 2010, eight days after crashing his car in front of Alakara Police Station, Mushin, Lagos.

To be headlined by rappers Olamide and Reminisce, the concert, which is set to hold on April 22 at Spice Route, Victoria Island, Lagos, will also feature Seriki, Lord of Ajasa, YQ, Sossick, WondaBoy, BaseOne, JahBless, PoslyTD, Chinko Ekun and CDQ.

The memorial concert is being organised by Eldar Records, a label which is home to the late rapper’s cousin, Arewa Oluwatosin Olanipekun a.k.a Tee Blaq.

Eldar Records CEO, Taofeek Olokodana, said there was no better way to mark the 5th year anniversary of Dagrin’s death than with a concert.

“We are hoping to see beyond death and pain while we celebrate his legacy, his evergreen music and gain in artistes he has influenced, including Tee Blaq who grew up with him,” Mr. Olokodana said.