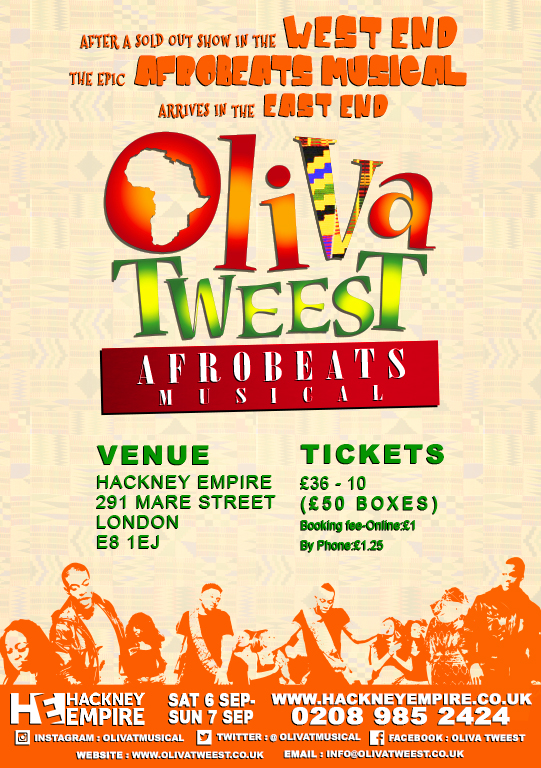 OLIVA TWEEST… The First Afrobeats Musical To Show Live in the West End Is Back.

Following a sold-out debut show in April 2013, the critically acclaimed Afrobeats musical Oliva Tweest, inspired by award-winning Nigerian Pop star D’Banj and his 2012 hit single “Oliver Twist”, is back for a hugely anticipated and exclusive run at London’s legendary Hackney Empire on the 6th and 7th of September 2014.

Making history in 2013 as the first Afrobeats musical to feature in London’s West End and one of the best independent theatre productions of the year, Oliva Tweest was written by young Hackney native Nana Duncan, created and produced by Yinka Ayinde, who is currently working with Nabil Elouahabi (Top Boy,24) and BAFTA Award nominated director Nicolas Kent on The Nightmares of Carlos Fuentes, and starred the likes of award-winning comedian A Dot Comedian, Polydor-signed Afrobeats star Mista Silva and burgeoning actress Dorcas Fapson who has gone on to star in MTV’s Shuga.

Yinka Ayinde, Nana Duncan and The Marimba Project have come together once again, with an exciting cast of some of the UK’s best emerging actors plus special guest cameo appearances and a surprise live performance to be announced shortly, to reprise their classic tale set in London about “the endeavours of Tobi, a cocky and promiscuous young man who wants and gets every girl he likes the look of. He tries everything he can, to get the attention of a young female songstress he meets at his favourite bar and in his attempts, he discovers her world of lies, ambitions and parental pressure”.

This year, the ‘Oliva Tweest’ musical is blessed with captivating choreography directed by Ezinne Asinugofrom Britain’s Got Talent semi-finalists C.E.O Dancers, and backed by lush live renditions and recreations of your favourite Afrobeats songs from the likes of Fuse ODG, Davido, Wizkid and Tiwa Savage among others, by the ‘Oliva Tweest’ live band JGen.

With beautiful vocal arrangements also provided by Conrad Benjamin of Clarity Vocals, plus musical direction from Jason Charles-Nelson, who has produced and co-written for the likes of X-Factor winnerAlexandra Burke and MOBO Award winner Rachel Kerr, Oliva Tweest is now even bigger and better than before, and is certainly not to be missed this year.