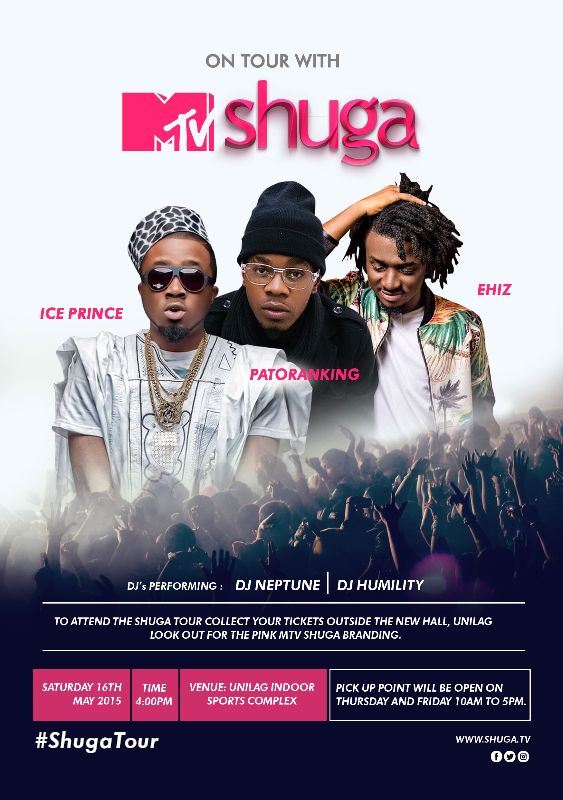 Lagos, 12 May 2015: On Tour with MTV Shuga: Lagos kicks off at Unilag this weekend, as MTV Shuga, winner of “Best TV Series” at the Africa Magic Viewer’s Choice Awards, takes over the campus on 16 May for an exclusive festival starring Ice Prince, Patoranking, DJ Neptune and DJ Humility.

Bringing the goals and aims of MTV Shuga to life in the real world, On Tour with MTV Shuga: Lagos combines hot beats from DJ Neptune and DJ Humility, with live performances from Patoranking and Ice Prince, plus the opportunity to meet and interact with the stars from the MTV Shuga TV series, including “Mr Nigeria” Emmanuele Ikubese (‘Femi’), Timini Egbuson (‘Toby’) and Sharon Ezeamaka (‘Princess’).

Hosted by MTV Base VJ Ehiz and Sharon Ezeamaka, On Tour with MTV Shuga is an exciting new part of the outreach campaign for MTV Shuga, and is designed to motivate young people to ‘know their status’.

HIV testing and counselling will be available on site, confidential and free of charge, while attendees will also be able to participate in auditions for the #MTVShugaAAA competition to be a red carpet reporter at the premiere of series 4 later this year.

Tickets for On Tour With MTV Shuga can be collected utside New Hall, Unilag on Thursday 14-Friday 15 May, from 10 am to 5 pm. Look out for the pink MTV Shuga branding.

MTV Shuga series 4, starring Emmanuel Ikubese, Sharon Ezeamaka, Nick Mutuma, Chris Attoh, Timini Egbuson and Olumide Oworu will air around the world from September 2015. The new season is set to top the success of series 3 of MTV Shuga, which aired to more than 550 million households in Africa,Europe, UK, The Americas, Asia, Australia and Oceania, and the Caribbean via a total of 97 TV broadcasters including 63 African broadcasters.

Fusing sexual and other public health messaging with world class storytelling and relatable characters, the new series of MTV Shuga focuses on a range of themes relevant to young people, including adolescent girls, first sex, gender-based violence, HIV testing and counselling, prevention of mother-to-child transmission (PMTCT) of HIV, disclosure of HIV status, stigma and the use of helplines.