A surprising thing happened last weekend in Rwanda, when Nigerian music legend, 2face Idibia, when he was treated like an unknown artiste in the country with only 50 people attending his concert.

The scantily attended event, made possible by  Belinda Umurerwa, who owns the event company, Kigali Entertainment Promoters, happened due to the inability of the organisers to convince people to attend the show,this according to many happened due to poor timing.

The concert, which should have been a success as his last, back in 2006, flopped. The scheduled time of 6pm, was to 10p.m due to the empty seats that greeted the organizers. 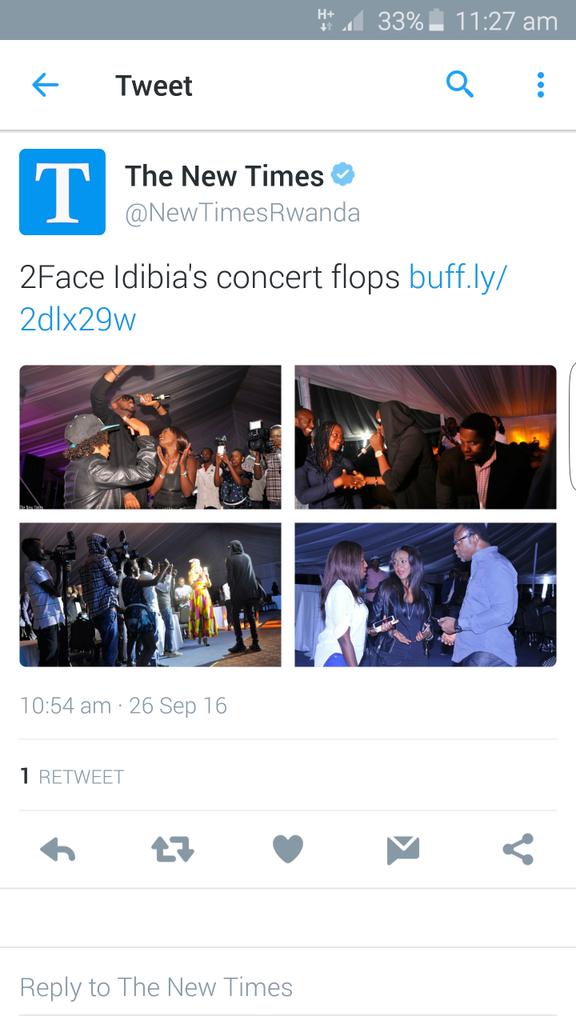 According to New Rwanda Times, the ‘African Queen’ star, came on stage at about 11:30p.m, which was after several hours of  dialogue between his management and the organisers of the show. He immediately apologized to the few who made it to the show, promising to deliver “unique” performances

“Hello Kigali. I know you’re very few bu t we don’t want to talk about whatever happened. I am going to do a unique show for you who managed to come”, he said.

Rwandan press, said the show which would have been a success failed  due to the organizers inability to adequately promote the show.

Few Rwandan fans took to social media to vent, read their tweets below:

Poor management at #2Face #Kigali concert….He is a king of flop!! Lowest turn up ever, 50 revellers showed up. DAMN….. pic.twitter.com/csTqmAJwcg