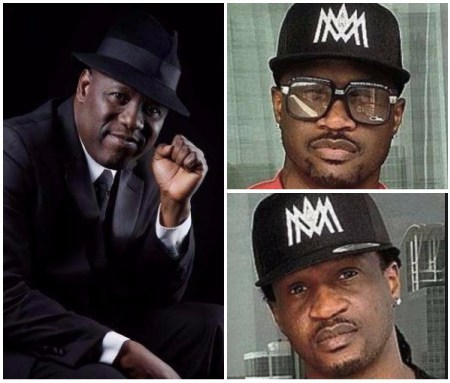 Despite shocking their fans with the recent trade of words on social media, some people don’t believe the brouhaha between Peter and Paul Okoye popularly known as P-Square is real.

Veteran broadcaster and CEO of Kennis Music, Kenny Ogungbe, popularly called Baba Keke thinks the recent feud between the brothers is just a buildup for their next single.

Baba Keke was quoted saying this during a show on  Kennis FM. He said:

“I am sure they have a massive show coming up in December and they are using this as a publicity stunt. They have over 100 songs and people who called us on the radio within 15 minutes, requested for about 29 of their songs.

If you are breaking up after recording about 100 songs, will you break up to record another big song as a solo artiste? At what age? How many songs are they going to release that would be up to what they have released already? At what age do they want to do that when people are interested in listening to songs released by younger artistes? Quote me anywhere that I said it is a game.”

Is this fight really a game?

“I Didn’t Shower In Denmark Before Getting On Stage” -Rudeboy